Improvement in freight rates, transit times and gate-out times in US ports gives a glimmer of hope

Container spot rates between Chinese base ports and the US West Coast and East Coast are seeing a steady decline since they peaked in January, in the run-up to the Chinese New Year (CNY) on February 1.

“As we previously predicted, spot rates have stabilized after an uptick prior to CNY. We hope they will remain stable and continue downwards as we move into the year although they would still be notably higher than the pre-pandemic rates,” said Shabsie Levy, CEO and Founder of Shifl.

As predicted previously by Shifl, spot freight rates for a 40’ HC container moving from Chinese base ports to LA have fallen roughly 44% from 1st Jan 22, while spot rates to the port of NY show a similar drop of around 38% over the same period. 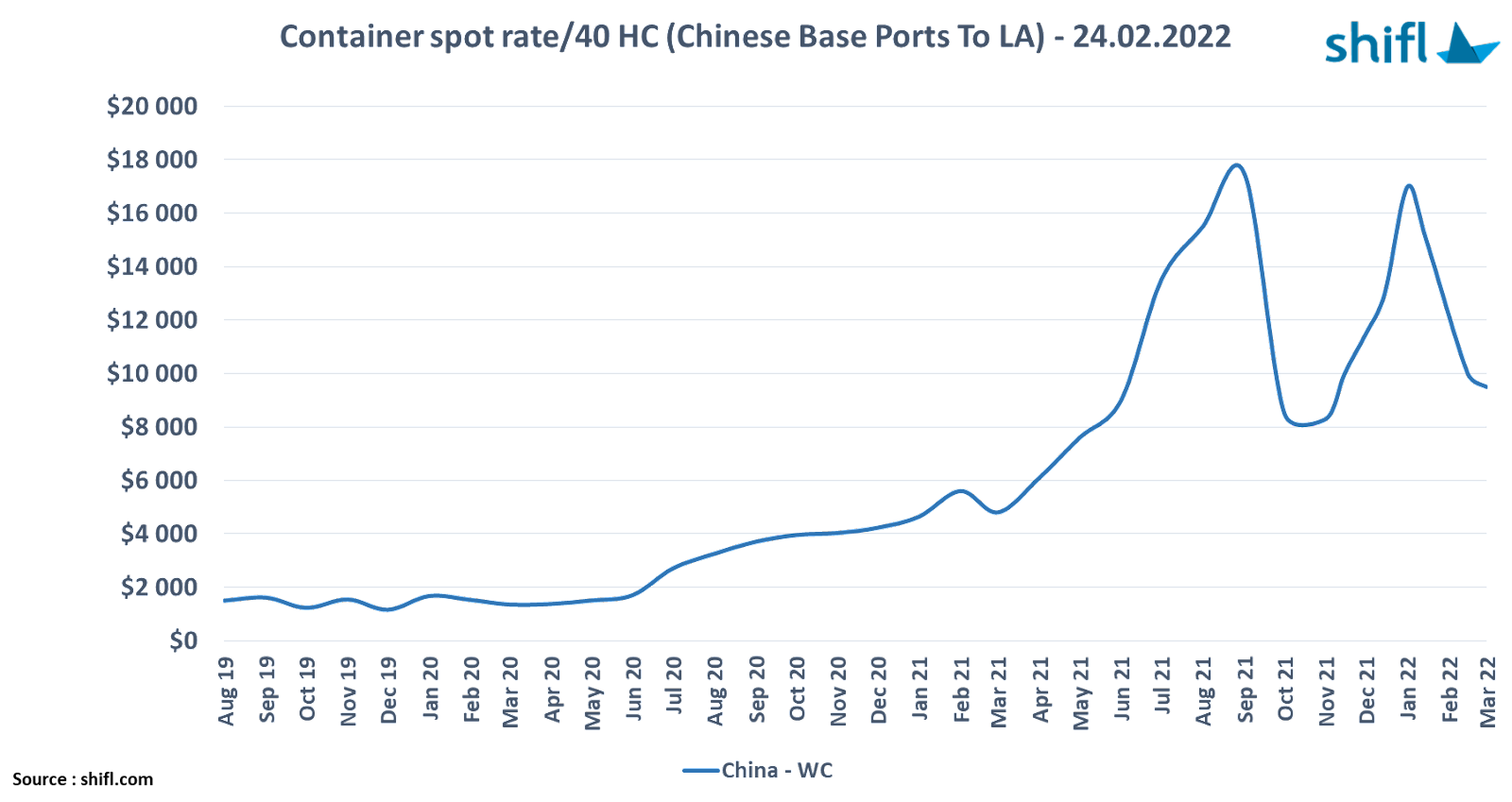 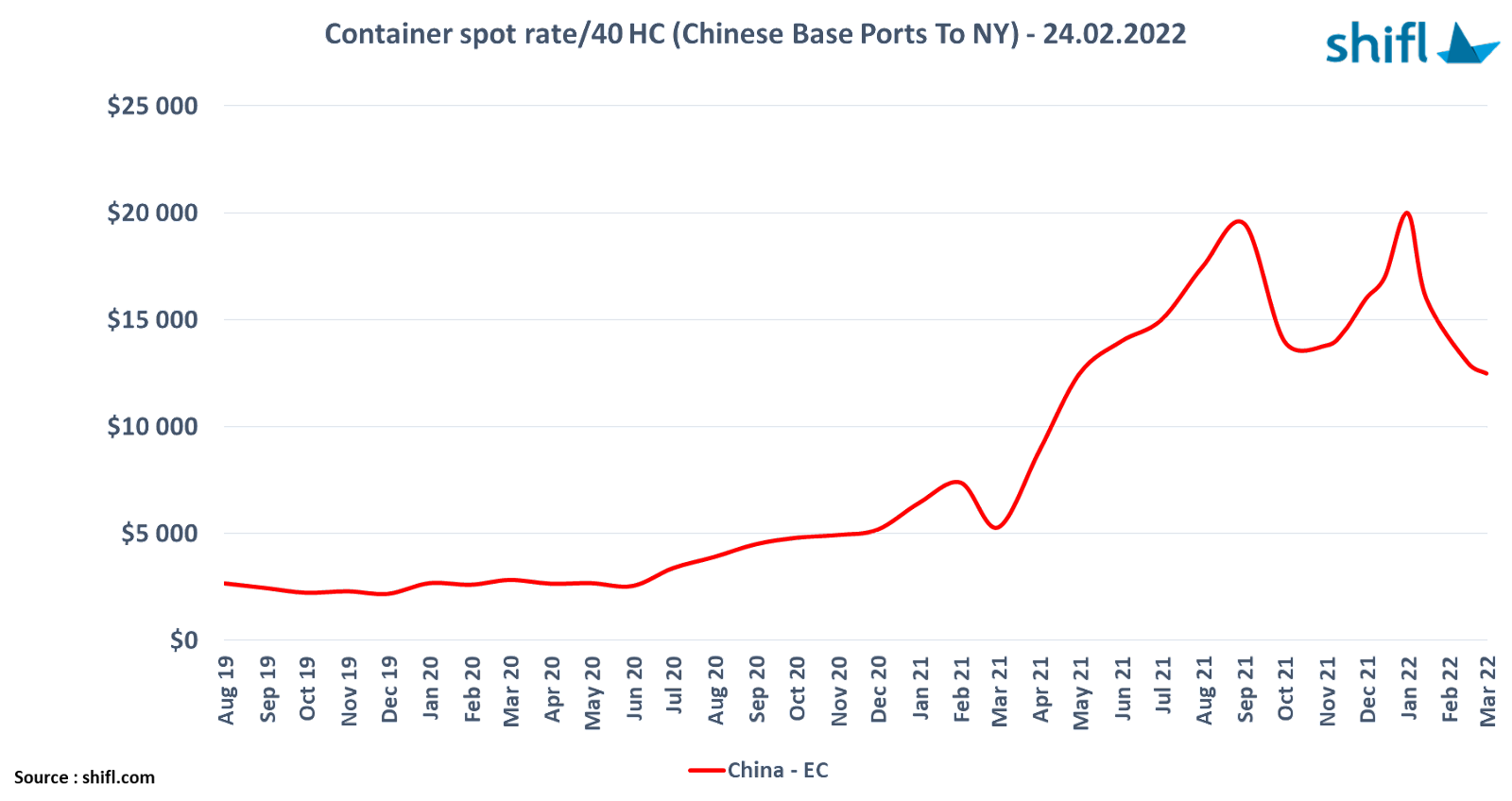 High container spot prices will only remain justified as long as retail demand follows through. However, several growing challenges will likely pull the brakes on freight prices. One of the foremost factors is US retail inventory volumes, which will determine retailer urgency in trans-pacific imports. FRED economic data on retail inventories shows the metric has surged spectacularly over January, indicating overstocked retail supplies that were meant for the holiday season.

Inventory strength is a bellwether to understanding the immediate future of US retail imports, with high inventory stocking levels reflecting a slowdown in demand for Asian imports. Census Bureau’s data on non-seasonally adjusted real sales for retail trade (excluding auto vehicles and parts sales) shows it fell by 22% month-over-month in January.

“A particularly strong increase in consumer price inflation (CPI) over ’21 and the termination of stimulus checks and higher spend on travel and restaurants can be alarmist to the retail consumer base. This could push consumers to tighten their spending and further exacerbate the fall in retail sales. Taking these factors into account, spot prices will likely not cause the level of pain it meted out to shippers last year,” said Levy.

While the number of vessels queued up around the West and East Coast ports has dwindled, the monthly throughput volumes continued to progress seen in the last few weeks and hopefully this trend will be sustainable enough to get supply chains out of the ripple effect caused by months of disruptions and delays since the onset of the pandemic. 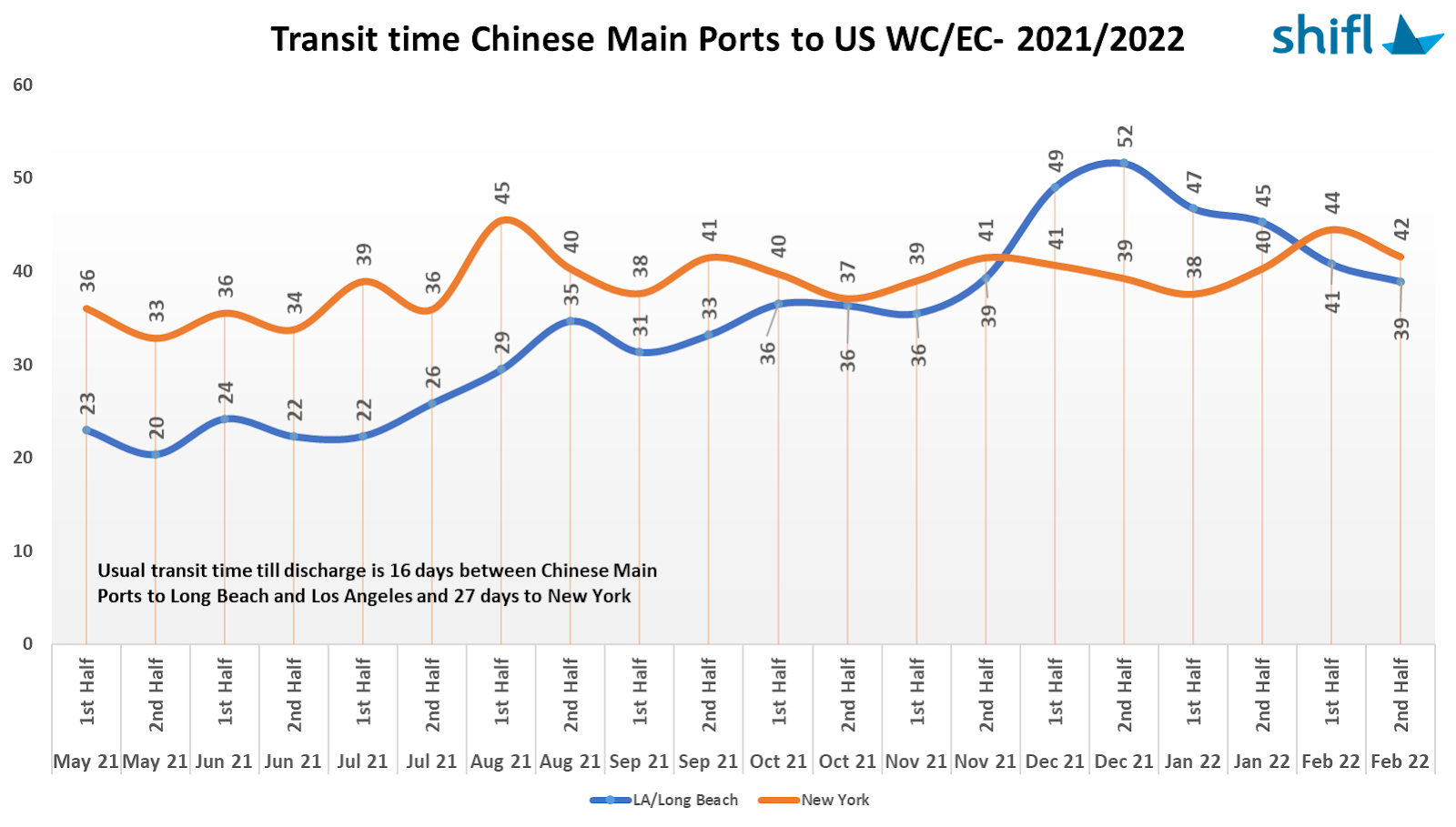 Albeit much higher than the pre-pandemic norm, transit times to the East Coast from China have more or less maintained a similar trend for over a year now but seems to be going down slightly. While the usual transit time till discharge was 27 days to the East Coast, it stood at 40 days at the end of January going up slightly in the first half of February and seemingly coming down in the 2nd of half of February 2022.

While the time that import containers dwell in the ports are still slightly on the higher side than normal the good news is that the gate out times are showing noticeable improvement dropping 40% from December 2021 highs on the West Coast and 25% on the East Coast for the same period. 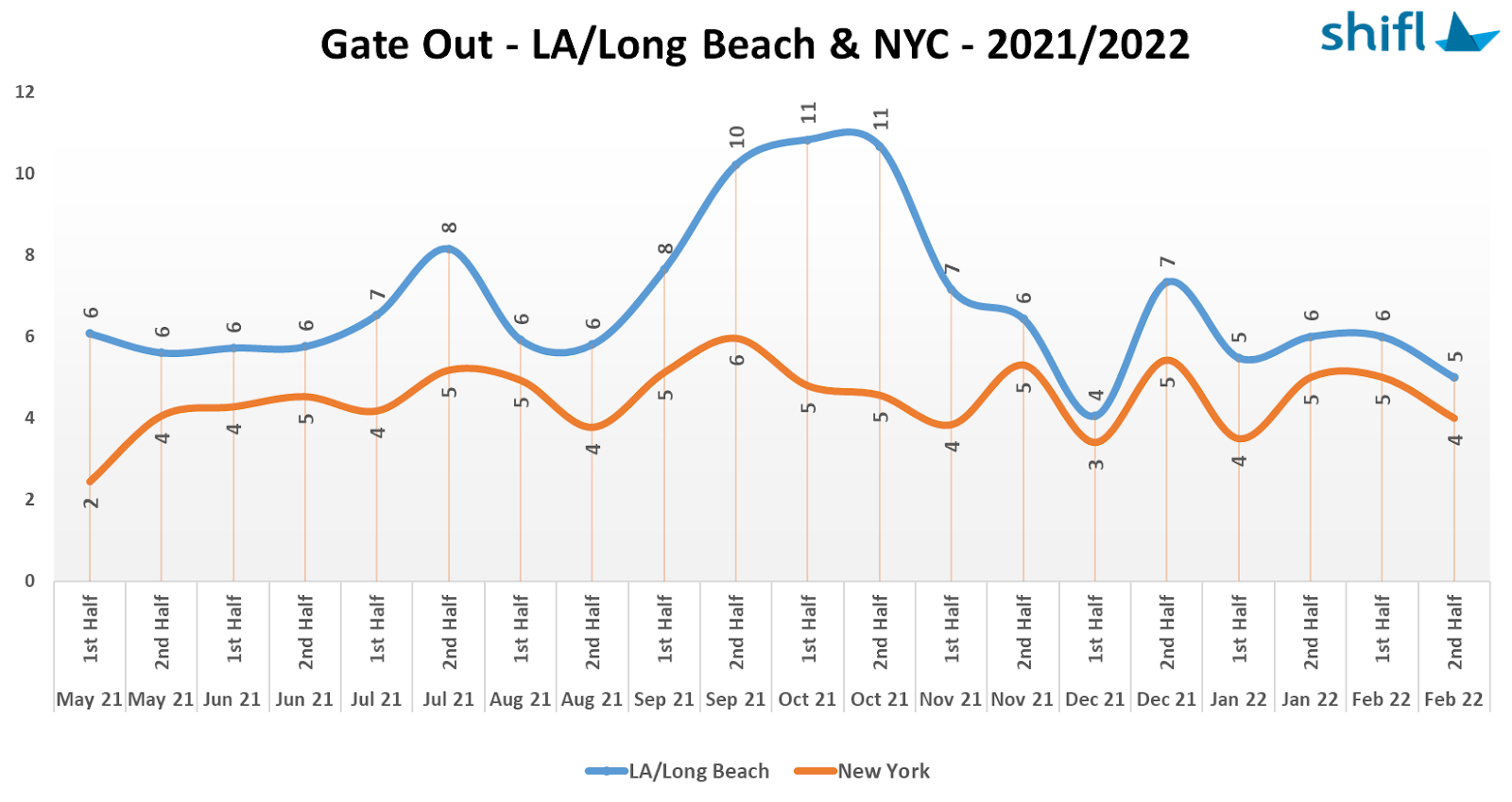 “We hope that a slow down will give the carriers and ports time to get out of the chaotic ripple effect that we are in and start the new peak season on a better and more sustainable note” adds Levy.

About Shifl: Shifl is bringing the supply chain into the future with technology and innovation that brings a huge array of real-life benefits to its customers. If you are an importer looking to bring your business into today’s digital age, be more in control of your shipping processes, and pay less — Shifl is for you. Shifl is headquartered in New York and maintains a presence in China, India, Vietnam, Malaysia, Bangladesh, Georgia, Dominican Republic and The Philippines. To learn more, visit https://shifl.com.

Consumer sentiment towards retail has been consistently falling over the last few months onaccount of rising inflation, even as prices…
Read More

Trans-Pacific transit times have fallen considerably across the US West Coast to 24 days from 54 days in Dec ‘21,…
Read More

Suffern, NY, April 5 2022 – Trans-Pacific container spot rates between China and the US West Coast and US East Coast…
Read More