Suffern, NY, May 9, 2022 – The US GDP fell 1.4% in the first quarter of 2022, which has concerned economists and analysts alike. Ripples have been felt across the Trans-Pacific corridor as discussions of a freight recession and cooling ocean freight spot rates hit the headlines.

The US saw an extremely high volume of imports in Q1 ‘22, increasing 4.77% from an already record-high Q4 ‘21 on the back of previous orders and consumer demand.

With Beijing teetering at the brink of a similar situation, the Chinese mainland might have problems returning to the previous smooth flow of cargo movement. This has been reflected in the cargo volumes from China sliding over May, and shippers believe the situation will remain murky for a while. 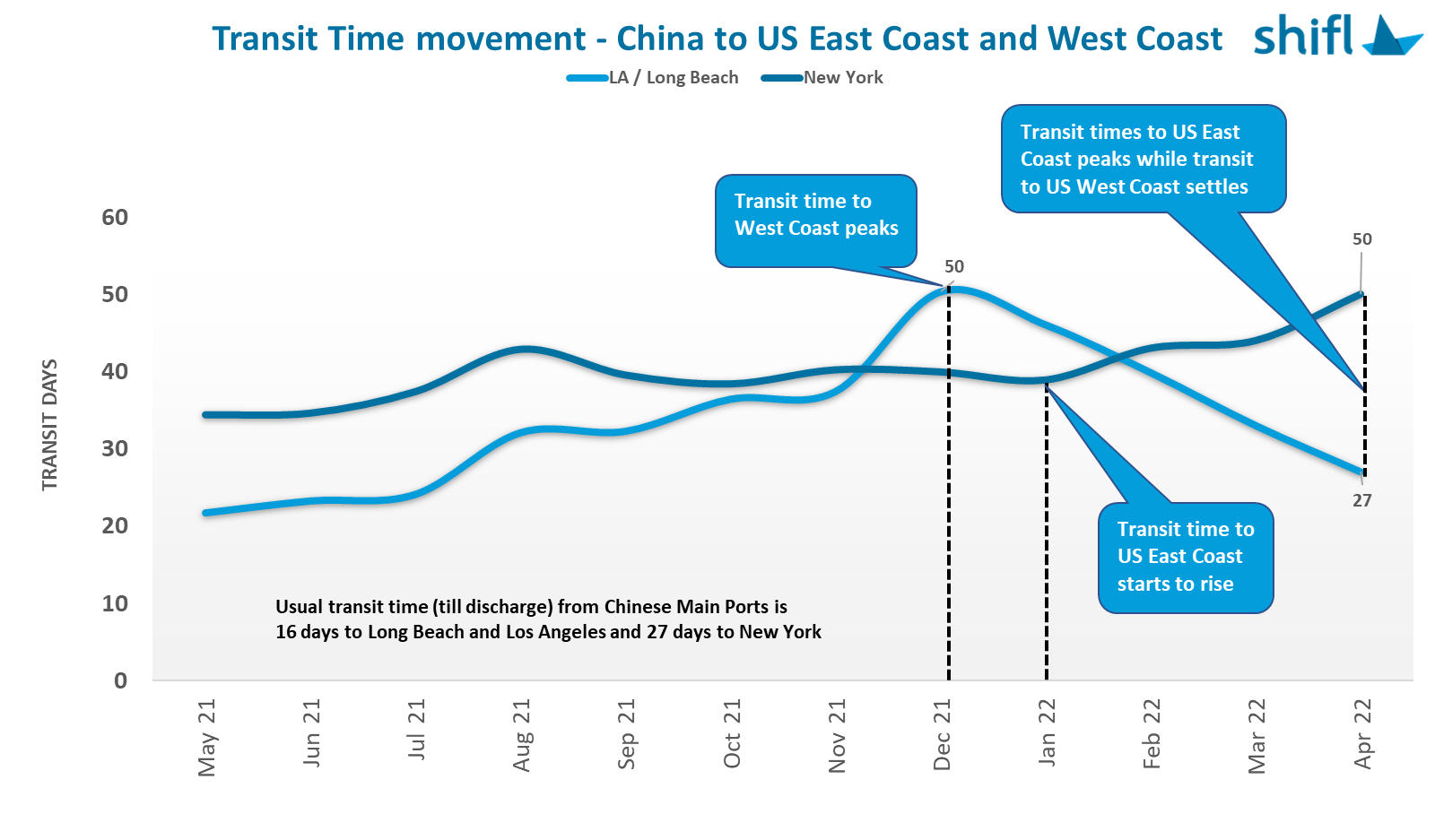 The current drop in demand and the lockdowns in China helped the US West Coast ports recover from the port congestion and resulted in a drop in total transit time to the West Coast ports in April 2022.

The transit time from China to Los Angeles and Long Beach dropped by 85% from 50 days in Dec ‘21 to 27 days in Apr ‘22. Although it is a significant improvement, this is still above pre-pandemic levels.

At the peak of West Coast congestion, customers shifted deliveries of future orders to East Coast ports at the time when they were performing better. Those shipments are arriving now, and as a result, the congestion has shifted to the East Coast. Transit to the port of New York went up from 40 days to 50 days representing a 20% increase for the same period and an 85% increase from pre-pandemic levels.

“We however expect a relief in the East Coast congestion in the near future as the impact of blank sailings created by the decrease in demand and China lockdowns will be felt in New York, albeit little later than West Coast ports due to the naturally longer transit time,” said Shabsie Levy, Founder and CEO of Shifl.

There is however the unknown outcome of the labor negotiations talks between the International Longshore and Warehouse Union (ILWU) and marine terminal operators due to begin on the 12th of May 2022. There has been cause for concern in the market that any breakdown in negotiations may cause disruptions in the US West Coast operations and add to East Coast Congestion.

Container Gate Out times improve across both coasts 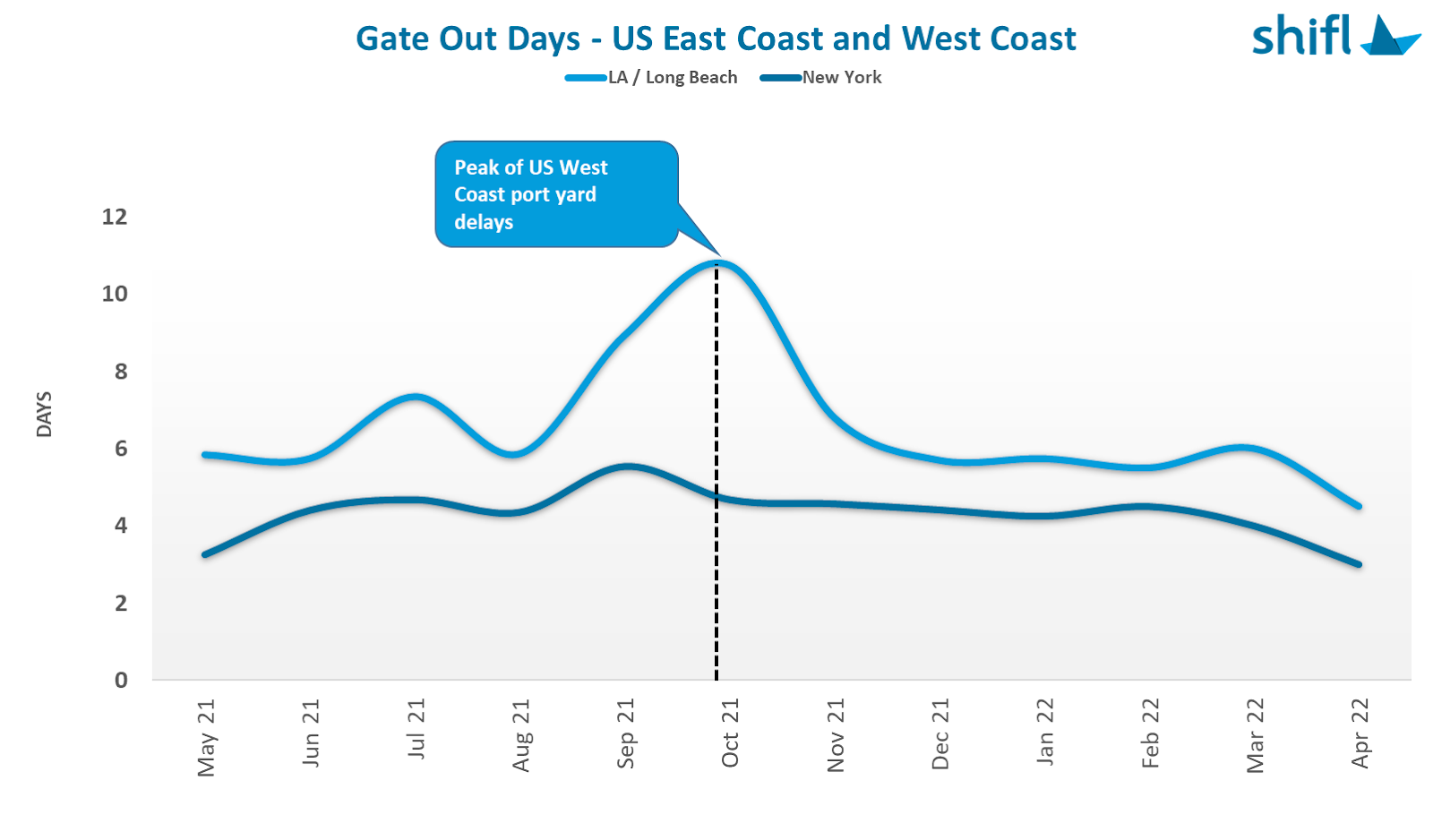 Container spot rates are on their way down, down, and even more

The restrictions on truck movement and workers lowered China’s industrial activity with exporters having a hard time delivering export containers to Shanghai port. This has resulted in lower volumes flowing in the China-to-US trade lanes.

Container spot rates fell sharply on the back of the combined impact of reduced demand in the US and Chinese exports affected by the pandemic-induced shutdowns in Shanghai. 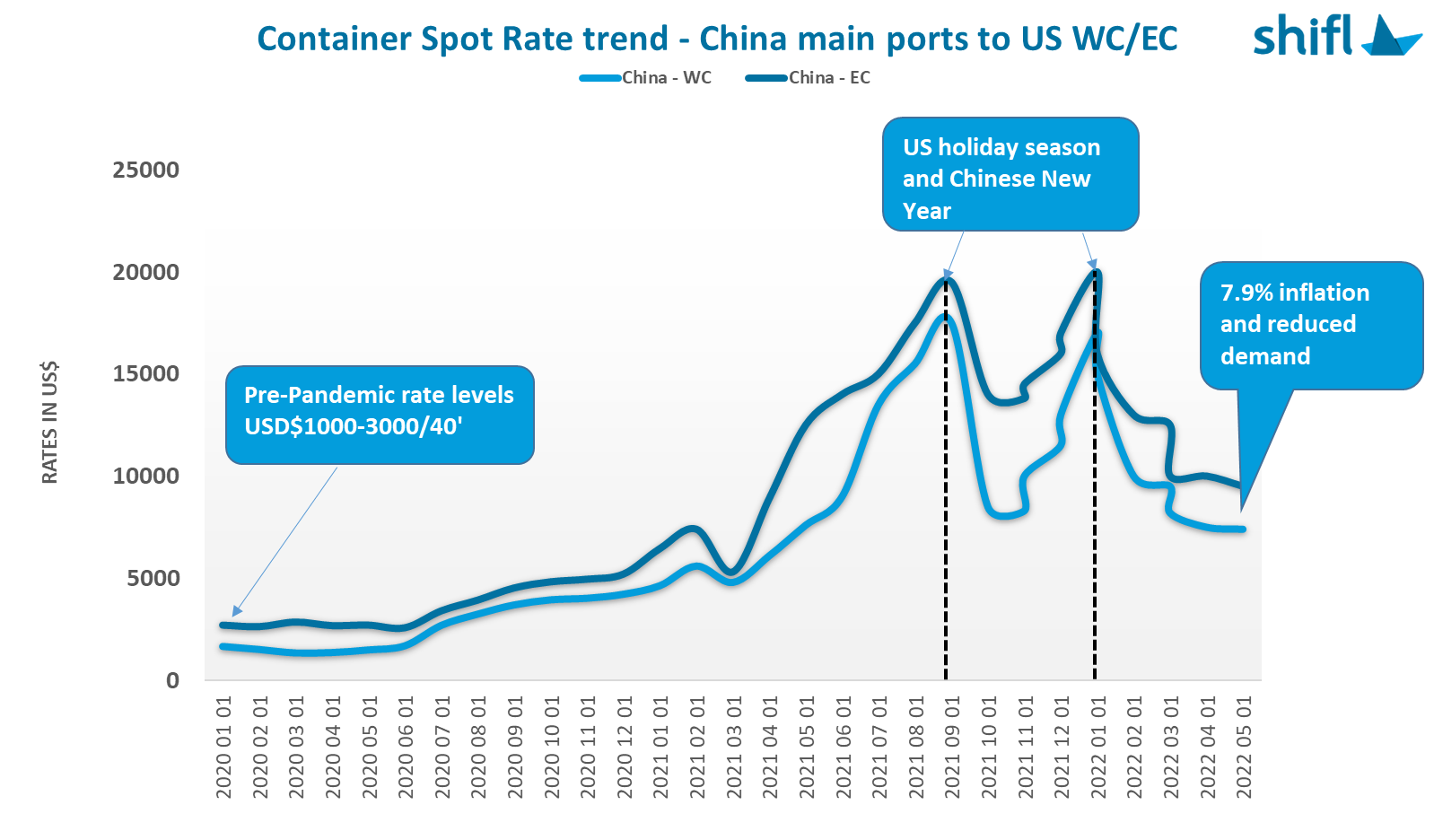 “The core reason for the continued drop in spot freight rates as we predicted previously is the reduced demand in the US which we are seeing from our customers’ data as well. The price of a 40’ container continued to drop in April 2022 to $7-8,000 for the China-US West Coast and around $9-10,000 for the China-US East Coast,” said Levy.

“Carriers have been trying to manage this drop in spot rates by implementing blank sailings while trying to lock shippers on longer-term contracts riding on the previous highs in hopes of extending their honeymoon period,” said Levy.

Disclaimer: The insights in this report are based on Shifl’s own freight data drawn from the significant volume of shipments handled by Shifl.

About Shifl: Shifl is bringing the supply chain into the future with technology and innovation that brings a huge array of real-life benefits to its customers. If you are an importer looking to bring your business into today’s digital age, be more in control of your shipping processes, and pay less — Shifl is for you. Shifl is headquartered in New York and maintains a presence in China, India, Vietnam, Malaysia, Bangladesh, Georgia, Dominican Republic and The Philippines. To learn more, visit https://shifl.com.

Consumer sentiment towards retail has been consistently falling over the last few months onaccount of rising inflation, even as prices…
Read More

Suffern, NY, April 5 2022 – Trans-Pacific container spot rates between China and the US West Coast and US East Coast…
Read More

Suffern, NY, March 22, 2022 –Transit times for containers moving between ports in China and their counterparts on the US…
Read More